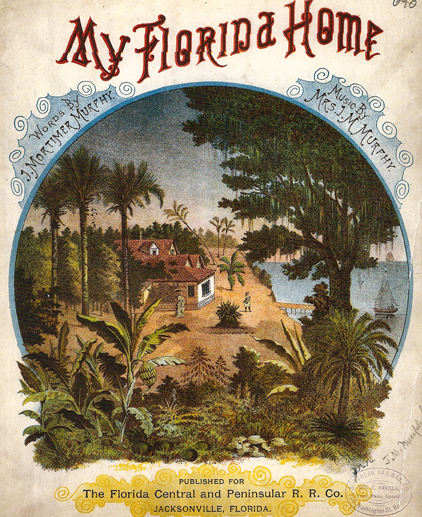 The Florida Sheet Music Collection includes nearly 300 titles from the late 19th and the early 20th century that highlight Florida themes, composers, and publishers. It is significant to researchers of music, art, and Florida history. The covers and lyrics provide historical perspective of Florida culture, revealing social attitudes and perspectives. Each piece of music has been been cataloged and can be accessed by searching by composer, title, the first line of text, or the first line of the chorus.

The Bank of America Black American Music Collection consists of nearly 3,000 pieces of published sheet music reflecting the influences of African Americans on popular music in the United States. The collection includes music created, performed, or published by African Americans or that portrays African American themes in the United States. Chronicling the evolution of African American inspired American music for a period of nearly 200 years and including such items as music books, manuscript music, photographs, posters, handbills and other ephemera, the Bank of America Black American Music Collection is useful to researchers, musicologists, sociologists, historians and visual artists. Illustrated covers and lyrics illuminate racial and cultural attitudes of previous generations.

The collection was acquired in 1988 from a Michigan music store and made possible by a generous donation on behalf of Bank of America (then Nationsbank).

The Joan and Gerald Weingarten American Sheet Music Collection was donated in honor of Adam Weingarten, USF class of 1989. This collection consists of popular American music from the 19th and 20th centuries. Of particular interest are the significant number of show tunes and big band pieces. Click here for a video of Gerald Weingarten discussing the collection »

The Hoffman Collection consists of music scores, CDs and related materials issued by the Japan Federation of Composers.