About Alvin and Mary Yorkunas 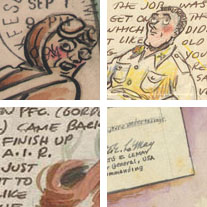 Alvin Peter Yorkunas Sr. was born on September 4, 1917 in Kingston, Pennsylvania to a Lithuanian immigrant family. Shortly after arriving on the University of Tampa campus as a member of the college’s football team, Yorkunas met Mary Ann Sampey, an attractive classmate working towards a degree in education. Mary Ann was born November 14, 1917, the daughter of Elmer B. and Mary B. Sampey of Tampa. Alvin and Mary Ann married on June 29, 1940.

Although an outstanding athlete who loved sports, Yorkunas’ real interest was in graphic arts. When on the road with the UT football team in 1936-37, Al frequently sent Mary Ann post cards which he illustrated with cartoons chronicling his experiences. While still a student at UT, Yorkunas obtained a part-time job at the R. E. McCarthy Advertising Agency, Tampa’s leading advertising firm. After graduating in 1939, he began working full-time for McCarthy as a graphic artist, executing original layouts and artwork for advertisements. He also did photo retouching, pen-and-ink sketching, and cartooning. Mary Ann graduated from the University of Tampa in 1939 with a degree in education. She embarked on a teaching career with the Hillsborough County School System, starting as a first grade teacher at Lake Magdalene School. She soon transferred to the mathematics department at Plant High School, becoming head of the department a year later. Following their marriage, Al and Mary Ann Yorkunas purchased a home in South Tampa.

Alvin Yorkunas volunteered for service with the Army Air Force following the December 7, 1941 Japanese attack on Pearl Harbor. Yorkunas spent the first years of his service in training, first in Florida and later in Mississippi and Pennsylvania. After completing the Intelligence School training course, he was assigned to the AAF Intelligence School’s staff with responsibility of creating visual aids and other graphic materials for instructional use. During his stay at the Harrisburg school he earned promotion to first lieutenant, then captain. Yorkunas accompanied the AAF Intelligence School when it moved to the AAF School of Applied Tactics in Orlando, Florida. At the Orlando school he served as chief of the Visual Aids Training Section. He then served as the Staff Intelligence Officer in the Marianas Islands, Saipan, and Guam, producing training aids, briefing materials, and other graphic resources supporting the strategic bombing campaign against the Japanese home islands. After the Pacific War ended, Yorkunas went to Japan as a part of the U. S. Strategic Bombing Survey. Completing his active duty on April of 1946, he formally separated from the service and entered the Army Air Force Reserve.

Although Mary Ann visited her husband as often as possible while he was stationed at posts in the United States, whenever they were apart Al kept in touch with her through frequent letters. In the course of his World War II military service Al wrote over 600 letters to Mary Ann, illustrating them with sketches, cartoons, pen-and-ink drawings, and color pictures. Sometimes he drew on the envelope, sometimes on the letter itself, sometimes on both. His illustrations ranged from simple sketches to elaborate, richly colored pictures. When the Army sent him overseas difficulties with military censors over his illustrated letters led him to start “Wish You Were Here,” a daily journal where he recorded his life and activities on Saipan and Guam in detailed drawings.

Returning home to Tampa in 1946, Yorkunas re-entered the commercial art field. He worked initially for famed cartoonist Fred Laswell and then became a political cartoonist for the Tampa Tribune. Around 1949 he established his own business, the Yorkunas Advertising Agency. Mary Ann left her teaching career to play an active role in the enterprise, handling office operations while Al lined up clients and did the agency’s artwork. The couple’s only child, Alvin Peter Yorkunas Jr., was born in Tampa in 1950.

As an officer in the Air Force Reserve, Alvin Yorkunas volunteered for active service during the Korean War and was accepted on April 15, 1951. Closing up his Tampa home and putting the Yorkunas Agency on hold, Al moved his family to Omaha, Nebraska where he was assigned to Strategic Air Command (SAC) headquarters at Offut Air Force Base. Curtis LeMay, Yorkunas’ old commander from 20th Air Force days in the Pacific and now SAC commanding general, was building the U.S. Air Force’s bomber fleet into an effective nuclear deterrent for the Cold War era. Yorkunas served as chief of the Presentation Branch of SAC’s Control Division, with responsibility for the information presentation systems and visual aids used by the SAC commander, vice-commander, and director of operations. The graphics and presentations Yorkunas created were used in briefings for the Department of Defense secretaries, Senate Armed Forces Committee, and Joint Chiefs of Staff.

From February 7 to 21, 1952 Yorkunas accompanied Major General J. B. Montgomery on an inspection tour of SAC bases as a member of the general’s staff. The trip covered 11,850 miles in 14 days, taking the inspection party from Omaha to London, Paris, French Morocco and back. He chronicled the trip in “Seat 19,” an illustrated daily record he wrote for Mary Ann. The title came from his seat number on the C-97 Stratofreighter used for the trip. Yorkunas was promoted to lieutenant colonel while serving with SAC, and the Department of the Air Force recognized his notable contributions by awarding him its Commendation Ribbon. Although his military career prospered, Yorkunas was increasingly troubled by his role in helping prepare for nuclear war, particularly with the idea of unleashing atomic bombs on his parents’ Lithuanian homeland, forcibly annexed by the Soviet Union in 1940. He decided not to reenlist when his tour of duty ended, and on January 31, 1954 he returned to civilian life.

From 1951 to 1954 the Yorkunas Advertising Agency was dormant, existing only on paper in Mary Ann’s record books. When he returned to Tampa in 1954, Yorkunas resumed his advertising work. Alvin Yorkunas was also active in Tampa business and civic affairs, serving as president of the Tampa Advertising Club, a director of the local Red Cross chapter, and a prominent member of the Kiwanis Club of Palma Ceia. He served as a trustee for the University of Tampa from 1950 to 1970, and as Trustee Emeritus thereafter. Following Alvin’s death on December 10, 1994 Mary Ann closed Yorkunas Advertising. She subsequently lived in retirement at the South Tampa home she and Al had purchased in 1940 until her own death at age 90 on January 19, 2008.